PARENTS and REPRESENTATIVES OF 43 MISSING STUDENTS FROM AYOTZINAPA, MEXICO
TO SPEAK IN AUSTIN

A group representing the parents of the 43 students kidnapped in late September in Guerrero, Mexico will arrive in Austin to speak to about their children’s experiences and about the human rights violations occurring in Mexico. Photos of the students’ faces, carried on placards in demonstrations throughout Mexico and in other countries, have become international symbols of the tens of thousands of forced disappearances and over 100,000 killings in Mexico since 2006. The parents will be available to speak at a press conference on Thursday, March 19,2015, Austin City Hall – Press Room, 10:30am. The media and the public are invited.

The group’s visit to Austin forms part of a national speaking tour of the United States. Representatives of the parents will speak in cities across the country to audiences in churches, universities, community organizations, and labor unions about the events of September 26, 2014 when police and an organized crime cartel killed six persons, wounded 25 others and kidnapped 43 students of the Ayotzinapa Rural Teachers College. The parents have continued to demand that their children be returned to them “alive as they were when they were taken.”

"The invitation of people of the United States to share our struggle is very timely since our plan is to travel to Central and South America and to Europe from where we have already received more invitations," said Felipe de la Cruz Sandoval, a representative of the Ayotzinapa group. "It is important that both citizens and government leaders of other countries are aware of the injustices in Mexico and the international community see what is the globalization of repression," concluded Mr. Sandoval.

The parents plan to take their case to the Inter-American Commission, Amnesty International and the United Nations. Amnesty International and many other human rights organizations, as well as the U.S. State Department, have for years found Mexico to be violating human rights through arbitrary arrests, torture, and extrajudicial killing. Organizers of the national caravan hope that the parents’ presentations will not only educate the American people about the human rights violations taking place in Mexico, but also lead American citizens and representatives to consider the hundreds of millions of dollars that the United States provides to Mexico through Plan Mérida for military equipment which has been used by the army and the police against Mexican citizens in violation of their rights.

While in Austin the group from Ayotzinapa representing the parents of the 43 students that disappeared are being hosted by Austin with Ayotzinapa, a local coalition made up of: a complete 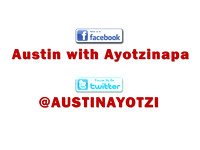