97 photos
A few pix of OCHPANITZLI TLAZOLTEOTL -- Danza Azteca -- KALPULLI AMEYALTONAL ATX
https://www.facebook.com/ameyaltonal.atx
KALPULLI AMEYALTONAL ATX is an Aztec Dance (Danza Azteca) group that hosts community gatherings, ceremonies and educational events. Their focus is on reviving and sustaining that which gives us direction- the traditions of our ancestors.
In recognition of the start of the Indigenous Peoples Day/Month celebration events are being held around Austin, San Marcos and San Antonio.
On Saturday October 5, 2019 at CASA RESISTENCIA's & Red Salmon Arts new location - 2000 Thrasher Lane Austin Tx. 78741 -the public was invited to an OCHPANITZLI ceremony in honor of Diosa TLAZOLTEOTL, earth goddess, eater of filth and composting; she is guardian and protector of the midwives, healers, curanderas, and herbalist.
The community had the chance to learn about the recovery of ceremonial traditions and rituals that honor women in all stages of life - maiden,mother,crone.
All participants were welcomed to join in the Barrida (ceremonial sweeping) of the roads, clearing the paths, making the lands fertile.
Event schedule -
2-3 pm: Tlazohteotl presentaion
3-4 pm: Convivio, food and corn husk doll workshop
4-6 pm: Danza Mexica Azteca & Barrida
The event was free and open to the public.
Danza was open to danzantes.
This event was presented in partnership with the City of Austin Office of Economic Development's Cultural Arts Department. 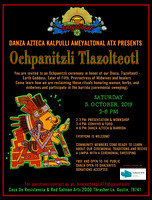